On a lecture trip during April 2011 we were asked: “I Kings 7:23 states that King Solomon’s temple had a metal bowl which was 10 cubits across and 30 cubits around. This would make the mathematical constant pi equal to 3. How could you Christians believe in a Bible which contain such blatant mathematical errors since everybody knows that π is not 3 but 3.14159.” 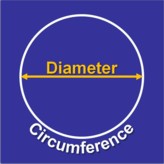 This sounds like the Bible contains a serious contradiction with known facts, so first let’s collect all the relevant information.  Thousands of years of experience tells us the circumference of any circle divided by its diameter always equals 3.14159. The Greek letter pi (π) is used to indicate this number.

I Kings 7:23 does state the bowl was 10 cubits across and 30 cubits around, but the description of it continues down to verse 26 where we read the brass bowl was one handbreadth in thickness. This means the bowl had two distinct circular rims – an outer rim and inner rim. Now let’s do some calculations.

If the inner circle had a circumference of 30 cubits, its radius can be calculated by dividing the circumference
by 2 x pi.

This gives it an inner radius of 4.775 cubits. The difference between the inner radius and outer radius should equal the thickness of the bowl.

A cubit measured 18 inches, therefore 0.225 cubit equals 4.05 inches. This is approximately the width of an adult hand. Check yours!

Since I Kings 7:26 states the brass bowl was a hand breadth thick there no problem in the maths at all. The only real problem is in the hearts and minds of those who take a single verse out of its context because they really don’t want to discover how accurate the Word of The Creator really is. Karl Priest has sent the following further observations on pi. According the solution above the diameter of the inner circle is 9.55, i.e. radius x 2. If you plug that into the formula pi = c/d, then pi = 30/9.55 which makes the answer 3.141 … . The accepted value of pi is 3.141 … and it has been ran to well over a million digits without a repeating sequence, so the engineers for Solomon’s temple were quiet sharp.

When I coached elementary level Math Field Day teams I told them to use 3 for pi in order to do mental math where the answer did not have to be precise. The value of 3.14 is what is commonly used by any student for solving problems using pi. The earliest numerical approximation of π is almost certainly the value 3 (an underestimate), but in cases where little precision is required, it may be an acceptable substitute. Pi can be described as a fraction 22/7.

Diane Eager adds: I can remember being taught to use the fraction 22/7 as the value for pi in calculations at school. And don’t miss Pi Day. Pi now has sufficient iconic status as to have a day to celebrate it. Americans celebrate it (by eating pies) on the 14th March because they write their dates with the month first i.e. 3.14. It is suggested Australians and British should celebrate pi day on the 22nd July, which fits with our way of writing the date, i.e. 22/7. We could also celebrate it by eating pies, but only round ones.