Homo floresiensis is the scientific name given to bones found in a cave on the Indonesian island of Flores initially in 2003.  Since then more bones have been found and the creature has been nicknamed “The Hobbit” due to its small stature, about 3 feet tall, and its small head.  As the bones were examined by various scientists a debate has raged as to whether the bones were from a human with a deformity such as microcephaly, or if they were a ape-man human ancestor.  However, the more scientists have studied these bones, the more ape-like they are revealed to be.

Let’s start at the top and go down.

According to the original report on the bones published in Nature vol.431, pp1055 – 1061 28 October 2004, Homo floresiensis had a brain size approximately 380 cubic cm, about the same size as a modern chimpanzee.  The skull/brain-case is low with a prominent brow ridge at the front, and its lower jaw completely lacks a chin.  The importance of this is that a chin is a distinctive feature of a human jaw bone.  The Hobbit jaw is more like that of Australopithecus, otherwise known as southern apes.  The most famous Austrolopithecus is “Lucy”, who is often referred to as a human ancestor, but really should be labelled with a scientific title that accurately describes her. Austrolopithecus mean” southern ape”, not ape-man. 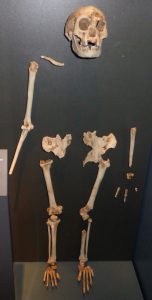 More bones, including limb bones were found and describe in Nature vol 437, p1012, 13 October 2005.  The H. floresiensis humerus (upper arm bone) is thicker than a human arm bone and where the arm bone joins to the shoulder, the head of the bone is rotated at an angle of 110 degrees to the shaft, making it like that of a gibbon or a monkey, rather than the shoulder of a human being, where the head of the humerus is rotated to an angle between 141 and 178 degrees .  The ulna is also thicker than a human ulna.  This is significant as unlike humans, apes and monkeys use their arms for weight bearing and walking, .

Three H. floresiensis wrist bones have been found and described Science vol. 317, p1743, 21 Sep 2007.  Scientists compared these with human wrist bones and those of three apes, gorillas, chimpanzees and orangutans. The Hobbit wrist bones are all best described as more like ape bones than like human bones.

The femur (thigh bone) and tibia (shin bone) are more like chimpanzee bones than human bones.

The researchers’ summary of the limb bones was: “For the femur and humerus, midshaft circumference differs from predictions for H. sapiens of similar body size, with femur robusticity at the centre of the Pan paniscus range of variation, and humerus robusticity midway between the P. paniscus and H. sapiens ranges. Thus, estimations of musculature and body mass in H. floresiensis would be more accurate if based on chimpanzee rather than human models”. Nature vol. 437, p1012, 13 October 2005.  (Pan paniscus is the scientific name for the bonobo or rainforest chimpanzee)

When the limb bones were found scientists were able to estimate the overall body proportion of H. floresiensis and compare it with humans and apes. H. floresiensis proportions are most similar to those of Austrolopithecus afarensis, i.e. a southern ape. The scientists also estimated body-weight-to-brain-weight relationships and came up with a result similar to A. afarensis and chimpanzees. Nature vol. 437, p1012, 13 October 2005.

The H. floresiensis foot is long in proportion to overall leg length, has long curved small toes and lacks an arch.  The bone that supports the big toe is small compared to a human foot.  A study reported in Nature, vol. 459, p81 7 May 2009 has several graphs comparing the size and proportions of the Hobbit foot to those of humans and chimpanzees and other apes. The Hobbit foot consistently fits into the ape range and not that of humans.

In summary: H. floresiensis was a creature with an ape-like chin, ape-like limbs, ape-like body and limb proportions, and ape-sized brain.  Therefore, the most logical conclusion is that it is an extinct ape.

Any suggestion that the Hobbit was a dwarf human, or a human with microcephaly can be rejected on the basis of the completely ape-like limb and body proportions. Any suggestion it was a human ape-like ancestor is based exclusively on the already held belief that apes turned into humans.  This belief that is exposed as blind by the only observation that real scientist have made concerning apes – they have  only ever been observed to reproduce apes, and people are well known to only give birth to people. All evolution claims are from the blindest of faith bases.