The original question was:
The teacher at my sons school has been showing them how all the evidence collected on snails in the British Isles is just a small part of the overwhelming evidence that all creatures have evolved and were not created. Can you help me know what I should say. What is this snail evidence that has been collected and how do we handle it?”

The short answer is that all evidence collected on UK snails does not show any evidence snails are evolving to a different kind or have evolved from any kind of non-snail.

Now for more detail, let me answer this by defining snails and slugs, and showing the difference between evolution and creation regarding snails, then explaining what the snail evolution school project is about. For those who want more technical detail I will list any observed changes, then give my conclusion.

What are slugs and snails?

Slugs and snails have been placed together in the phylum known as Mollusca, the name derived from the Latin word mollis, meaning soft. Many other soft bodied creatures with a hard shell such as the very different octopus, squid and cuttlefish are also placed in this phylum. Never forget such classification is an artificial way of organizing data for convenience. The classification system then puts the slugs and snails into what is known as a ‘Class’ known as Gastropods, which means ‘stomach foot’. This group is then further split according to shared physical characteristics into an ‘Order’, and then further into a Family. At this level, the Linnaean system then divides into two further categories – Genus and species. The Genus can have one or more species under it. The study of Mollusca, known as Malacology is dominated by evolutionary thinking.

It is widely accepted that all gastropods (slugs and snails) were once aquatic and had both shells and gills. Over long periods of time they evolved and lost either or both these features. Those claimed to have lost their shells are commonly labeled slugs. Those with only small shells are claimed to be intermediate stages in the evolutionary process. But like any long time process none of this has ever been observed.

The Bible provides a very different picture where God created all creatures to reproduce according to their kinds (Genesis 1:24-25). Overlaying that creation picture is a sad history of degeneration and extinction following man’s fall into sin and the judgment of Noah’s flood. It is also possible that the separate kinds mentioned in Genesis relate to some of our modern classification groups of where similar species have been grouped together as ‘Families’.

Perhaps the greatest example used in schools to convince children Charles Darwin was right is the many variants found in snails belonging to the genus Cepaea. This is technically called polymorphism, derived from the Greek ‘poly’ meaning ‘multiple’ and ‘morph’ meaning ‘forms.’ The adults display great variation, specifically in shell colour and banding. The project Evolution Megalab, a Europe-wide survey was launched in 2009 to study two particular species – Cepaea hortensis, commonly known as the White-lipped snail, and Cepaea nemoralis – the Grove or Brown-lipped snail, which is slightly larger. Both of these species are common throughout the UK inhabiting a wide variety of habitats from grassy fields and hedge banks to sea cliffs. 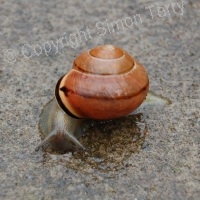 Scientists have been studying these particular snails for many years and have discovered that snails with darker shells tend to be found in woodland areas, whereas banded and lighter colored specimens tend to be typical of grassland. This variation is thought to be adaptive assisting the snail’s camouflage. A number of predators dine on these snails, including song thrushes. In the last thirty years, thrushes have declined in their numbers, and so with fewer thrushes on the scene, questions arise as to how the snails will respond in their respective habitats. Further research has indicated that darker shells used to be more common in the north of the country compared to the south. Climate change is believed to have contributed to the decline in darker shelled individuals, as these would warm up quickly in sunlight, increasing activity and vulnerability to predation.

The project encourages children to collect the snails and collate data, recording their findings on a large online data base. This will provide fresh evidence as to the presence of light shelled snails in the north, confirming or disproving convictions over climate change. 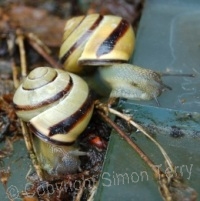 The science is very practical and a great opportunity for children and adults to learn more about local wildlife, and explore diversity in the plants and animals they find. The problem with the project is that the science in UK schools is wedded to a humanistic philosophy, and the children appear to not be taught to differentiate between the two. As the name indicates, evolution is very much at the heart of the project. Again the assumption is that evolution is change and therefore any change even in color or number is proof of evolution, and means snails were not created.

Looking at variation that exists within banded snails and studying the process known as natural selection actually shows us that for the entire time during this ‘grand plan to collect data for evolution’, all observed snails have remained snails. This is actually evidence they reproduce as God says in Genesis: after their own kind, as He created all things to do. We can therefore confidently predict the data will confirm this truth again and again. Natural selection, described as one of the basic mechanisms of evolution, cannot enable anything to evolve – snails included. We can also confidently state that it is the evolutionist’s faith over and above the evidence that concludes such little changes in color can over unobserved billions of years transform one kind of animal into a completely new kind of animal.

For more information on snails and what the evidence shows download PDF article here.

Species that are genetically compatible are able to reproduce and this can be seen at the family level in slugs. In the British Isles we have five distinct ‘family groups’ or ‘kinds’ of slug – the Arionidae, Limacidae, Milacidae, Agriolimacidae and Testacellidae. The species within these families are similar in many ways. In fact within the Arionidae there are reports of hybridisation – that is the sexual reproduction of two different species. Hybrids between Arion ater and Arion rufus (Noble 1992) and between Arion ater and Arion lucitanicus (Hagnell, Schonder, and von Proschwitz 2003) have been reported in Europe. (1)

Here is a key example of groups of similar species (large Arionid slugs) reproducing after their kind. Authorities in Denmark maintain that A.vulgaris, Arion.ater and Arion rufus are sub species of the same species. (2).

The evolutionist considers slugs to be snails that have lost their shells, but this is not based on observation. What we do observe is slugs reproducing within their family. This compatibility is consistent with the Genesis record that creatures were made to reproduce after their kinds. 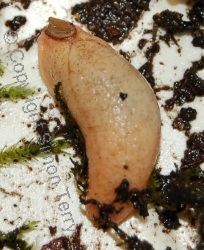 Most people are aware of slugs and snails, yet they may not have not noticed there are many species that bear shells too small for the animal to retract into. In some cases the mantle partly or wholly covers the shell. (The mantle is the oval part covering the front of the animal, resembling a cloak in slugs). These particular slugs are referred to as semi slugs. In the south of England the species Phenacolimax major (the Greater Pellucid Glass Snail) is such an example.

Finding these creatures can be quite a surprise – is it a slug or a snail? But does it have to be either? We are forced into evolutionist thinking and immersed in a culture that believes the semi slug is on its way to becoming a slug, but again this is not based on observation, only on philosophy. We could just as easily ask is it unrelated to either? Has it always been a Semi Slug?

The Field Slug, Deroceras reticulatum, common in gardens, has been used as an example of evolution. This species has a thin plate of calcium carbonate hidden inside the mantle (In members of the Arionidae chalky granules can be found instead of a shell plate) (3). We are led to believe the shell is vestigial, a rudiment of its ancestral shell. But to have once had a shell and to have lost it is not actually what evolution is about, since it doesn’t help you show where shells come from. The school teacher has been taught the philosophy that any change is evolution and usually proceeds to ignore the fact that we have not actually seen these creatures lose anything. All we have observed and documented is a slug quite distinct and unique from other slugs – nothing more.

The family of slugs referred to earlier as the Testacellidae include three resident species in Britain. The distinction between two of the species, Testacella haliotidea and Testacella scutulum has been an issue, as they may in the end prove to be varieties of a single species. They are carnivorous slugs, burrowing underground to hunt for earthworms. All three bear a small external shell at the rear of the body. The evolutionist assumes the shell was larger in the past, and because of the slug’s subterranean lifestyle, concludes the shell became too cumbersome, and so in time evolved to be smaller to help mobility in search of prey. But this again would be a loss of feature if anything, devolution if you like, and again we have to point out it is not based on observation. And all school science teachers should make sure students know the difference between observation and pure guesswork.

The study of slugs and snails, particularly those found in the British Isles do not reveal any evolutionary transition from one kind to another. To draw paths of descent to a common ancestor is pure imagination and outside of what we observe in the field. What we actually find is striking commonality within classified family groups that in places have shown sexual compatibility. The findings are a direct confirmation of the Genesis record that creatures reproduce after their kind, and children everywhere are entitled to know this.

3. Species in the Arionidae have an ‘internal shell’ which is usually a few calcareous granules. Geomalacus maculosus in this family, although a separate genus, has a thin shell plate like those found in the Genus Limax.

Simon Terry became a Christian when he was 18 after reading about Jesus Christ in literature he had received at a gospel meeting in his childhood. After qualifying with a Bachelor of Education degree (BEd) in the year 2000 from the University of Wales College Newport he joined the London City Mission working mainly amongst the youth and then later in community outreach. For three of those years he also supported a ministry in Covent Garden amongst those who believe in the new age philosophy using a literature table and attending festival events with a larger literature stall. In 2007 he left London for Leicester to join Answers in Genesis UK/Europe as a speaker for the ministry. Since 2009 he has been working as an evangelist in four parts of Leicestershire concentrating his time on door to door evangelism on the four districts and a literature table in his local town centre. He is currently working on a book for this work entitled The Big Questions of Life Answered and still takes the opportunity to speak on the subject of creation. Simon is married to Yvonne with two children. Simon’s long term interest in slugs and snails stems from a childhood fascination. Their distinctive design, variability and extraordinary way of life have greatly intrigued him. Around 2003 he began studying the autecology of the land snail Helix pomatia in the south of England and hopes one day get his work published giving the glory back to the Creator in a field dominated by Darwinian thinking.