The original question was: Why do you people get so fascinated with living fossils? After all, any survivors from evolution would, by definition, have to be living fossils. It doesn’t prove a thing.

Charles Darwin was fascinated by living fossils and so are we! Darwin is the man who defined the term ‘living fossil’ when he said: “These anomalous forms may almost be called living fossils; they have endured to the present day, from having inhabited a confined area, and from having thus been exposed to less severe competition.” (Darwin, Origin of Species, 1859, 1st Ed. p107)  In his conclusion to the same book he wrote: “Species and groups of species, which are called aberrant, and which may fancifully be called living fossils, will aid us in forming a picture of the ancient forms of life.” (Darwin, Origin, 1859, p486)

His original context was in England where they had begun planting Gingko trees everywhere. Ginkgoes had been found living in China and were bought into England. By Darwin’s time, (middle to late 1800’s) the Ginkgo was becoming a widespread street planting. Some in England who were fossil collectors, had long known about Ginkgoes, but only as fossils from the Jurassic shales around Yorkshire.

The picture above this answer is a fossil Gingko we collected from Yorkshire. It was evident to Charles Darwin and his colleagues, such as Charles Lyell, that the living Gingko and the fossil one are for all practical purposes the same. Hence Darwin’s term ‘living fossil’.

What’s the fascination for us?

The answer is simple: Darwin was the first person to invent a scientifically testable thesis on whether Creation was true or not. His Theory of Evolution contained a simple thought. If life has evolved from simple to complex, from molecules, to cells to seaweed to plants on land, or some cells had become animals and birds, then there should be an obvious progression in the fossils. Simple kinds of creatures should step by step become more complicated via natural selection.

Darwin, who graduated with an M.A. in Theology, knew very well that the Bible’s position was totally different. Ten times in Genesis chapter 1, the Biblical record declares God created things “each according to their own kind”. Therefore the origin of plants had nothing to do with the origin of animals. The origin of fishes was not connected to the origin of birds, and neither was the origin of seaweed involved in producing orange trees. Here was a distinguishable test. If Darwin was wrong, and Genesis right, then creatures should appear distinct and separate in the fossil record no matter how old you thought rocks, or no matter how you thought the creatures had become fossilised.

The Gingko was a viable test. People who believed Darwin’s and Lyell’s long ages were fascinated because they thought the Gingko had survived in isolation for millions of years in China. The plant experts were also fascinated because of how little it had evolved at all. As Darwin declared in his definition – the living one and the fossil one are for all practical purposes the same.

Over the years I have gathered a huge collection of fossil Gingkoes from the around the globe, starting with our Triassic coal-bearing shales in Ipswich (Queensland, Australia) when I was a student many decades ago. Gingkoes from all geologic strata are now to be found in our Creation Research collection.  Here are some of them. 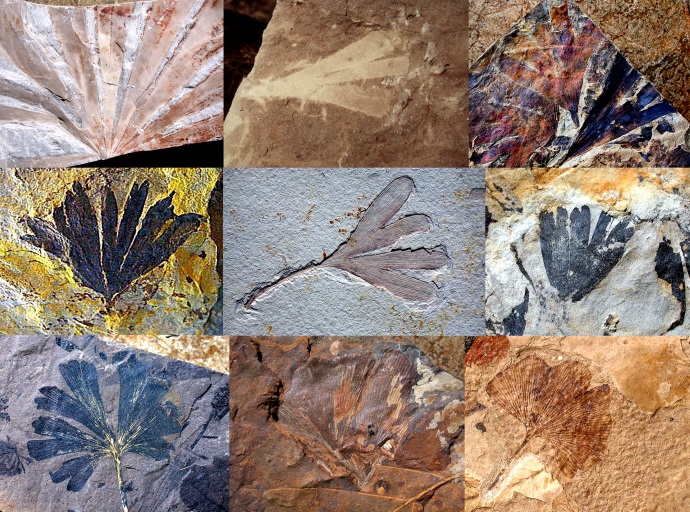 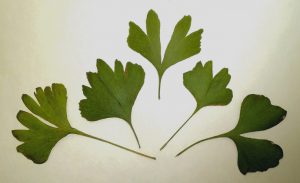 Anyone looking for evolution in Ginkgoes will be really disappointed, as the biggest change to be found is merely in leaf division numbers.  This has nothing to do with evolution.  It is just a normal variation, as can be seen in the leaves in this photo, which were all picked from one tree.

The fact that ginkgoes have reproduced after their kind is further confirmed by a recent study of the organic molecules found in fossil ginkgoes. Scientists from Lund University found that fossil ginkgoes are biochemically similar to living ginkgoes.  (see ScienceDaily, 4 July 2017)

To Darwin’s identification of the Gingko can be added the most famous living fossil of all, the Coelacanth, one of which is also in our collection.

So why are living fossils important?

Any creature that has survived unchanged down to today is a living fossil. But what’s more important is that the living fossils are not merely the same as the ones in the rock. The gaps between the living creatures – the visual and genetic distance between them, turns out to be the same as the gap in the fossil record. It was this factor that persuaded me when I was a student in the Queensland University Geology Department to question the theory the evolution and ultimately abandon it, long before I accepted the Biblical teaching of Creation “after their kind”.

Our text book from Queensland University was by Professor Carter of Cambridge University who said, “We do not have any available fossil group which can categorically be claimed to be the ancestor of any other group. We do not have in the fossil record any specific point of divergence of one life form for another and generally each of the major life groups has retained its fundamental structural and physiological characteristics throughout its life history and has been conservative in habitate.” (G. S. Carter [Fellow of Corpus Christi College, Cambridge] in ‘Structure and Habit in Vertebrate Evolution’, Sidgwick and Jackson, London, 1967.)

And Carter claimed this was true of every group he had studied.

After 50 years of collecting I can confirm his words are accurate.

Since we’re referring to fossil Gingko plants – the next influence in my living fossil mindset was Professor Corner from Cambridge University who stated, “Much evidence can be advanced in favour of the theory of evolution – from biology, biogeography and palaeontology, but I still think that, to the unprejudiced, the fossil record of plants is in favour of special creation.”
Prof. E.J.H. Corner (Professor of Tropical Botany, Cambridge University), in ‘Contemporary Botanical Thought’, Oliver and Boyd, 1971, p.97; also found in ‘Evolution in Contemporary Botanical Thought’, A.M Macleod and L.S. Copely (editors), Quadrangal Books, Chicago, 1961.

To understand Corner’s thought pattern you have to ask why he would have said that?

Being a Cambridge Professor in a University that has a long history of relationship with the Christian Church, and therefore a passing familiarity with the Bible, Corner was aware that the first pages of Holy Scripture, refer not only to a Creator and a creation, but to all life forms being created as separate kinds.

The history of Biology reveals that the word genus as in ‘genus and species’, is actually borrowed from the Latin edition of the Bible (Genesis chapter 1 verse 11). The Latin word ‘genus’ is translated into English as the word ‘kind’. In Genesis 1 we read 10 times that God created separate Kinds. In other words the major groups of creatures have always been separate and unrelated. No matter how they got into the fossil record – life’s family trees will never link up to a single common ancestor. And Professor Corner was convinced that the fossil record supports that claim.

Now that I’m familiar with the both the Biblical text and have an enormous fossil collection I have found from all over the planet, I am convinced Professor Corner is also correct. Living fossils are vitally important because they are a predictable result only from Biblical Creation being true and a devastating denial of evolution as the history of life. And don’t hang round waiting any longer for the missing links to be found. We have been waiting for over 150 years now, and it hasn’t happened yet. That is why living fossils fascinate us, and they should fascinate you with the reminder God’s Word in Genesis is true.

Darwin’s ‘tree of life’ was a check on the falsifiability of Genesis. If Genesis was true then no single family tree would exist. If Genesis was false and evolution correct then a family tree should exist that showed different kinds branching out from a common ancestral species. Since it doesn’t Darwin has been falsified. Genesis has been vindicated.

Of course there is a long term punch line. The Creator only expects us to believe something because it is true. We all live in a world where the only thing we see is living things producing their own kind. It is why God will hold you accountable for calling him a liar if you accept Attenborough’s nonsense, Dawkins deceit or Darwin’s revenge against God for the death of his daughter Annie.

Related questions on what is a Kind:

KIND? Creationists use the word Kind, but never define it? What do you mean? Answer here.

SPECIATION? Is speciation a fact, and does this prove evolution? Answer here.

GALAPAGOS Island finches have shown new evolution recently, so how do you explain this? Answer here.

COYWOLF: The coywolf has appeared within the last century. Has a new species evolved? Answer here.