Conventional theory states that coal formation is associated with a swamp environment that was slowly covered by sediment and then compressed over millions of years. It is estimated that for 1 foot (30cm) of coal to form took 20 feet (6m) of vegetative swamp material, called peat, to be compacted by the subsequent “rock layers”.

Since no one has observed this swamp process happen, then this explanation is largely derived from the assumption that all rock layers containing fossil materials are buried environments where the plant material grew in place and was buried where it grew. Therefore, since coal is composed of carbon rich plant derived organic materials, then theorizer’s look for modern environments that could provide such materials in order to provide a theory or model of origin. So the question we will first deal with is: “does this ‘slow swamp’ model for coal formation really stand up to observations when studying coal around the world?”

One necessary ingredient that would have to be present if coal was a buried environment would be the presence of a well-developed swamp soil profile under the coal layer as evidence that the plants actually grew where they are found. There should also be in the underclay the presence of a layer of roots often called stigmaria indicating that the buried material was actually growing when slowly covered by the encroaching sediment that covered it. In the real world we rarely see either the swamp soil layer or the root presence. In fact many large coal seams are found lying conformably on top of sandstone and in some cases limestone material without any soil layer or root bed at all. Upon close scrutiny, even when carbon like material is observed underneath a coal layer, it very often does not display any root connection to the coal as should be expected.

Another problem with the swamp theory is the evidence of high energy burial that is not typical in a placid swamp. Present day peat bogs are almost always associated with low-lying low energy environments. However, in many coal bearing sediments you observe high angle cross beds in the sediment above and below the coal indicating that the material above and below was deposited rapidly and catastrophically. Therefore, if the layers above and below had high energy most certainly the coal forming material was deposited rapidly as well. This is specially seen when high angle beds are found to penetrate within the coal also.

Adding to this list is a dangerous killer. The often very large pockets of explosive methane gas in coal seams. Present day swamps can be observed to generate gases particularly in the summer when biological activity is at a peak. Surface gases are one cause of flash fires when lightning strikes a swampy area. But such gases do not accumulate in swamp sediments because they leak out as fast as they form. The same phenomenon is seen in commercial rubbish tips where methane generation occurs soon after burial of organic materials. Therefore, to avoid explosive quantities collecting within rapidly buried community rubbish piles, piping systems are incorporated which direct the gas to burners and so remove this problem. Thus the evidence of free methane generated from plant materials in coal seams shows they were not only accumulated quickly but the seam was buried rapidly as well. Slowly forming swampy sediments would simply not accumulate the large quantities of methane we strike in the real world coal seams 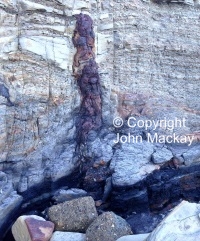 Another clear indicator a rapid burial of the organic material is the presence of what are called polystrate fossil trees or stumps that are found in all kinds of dispositions related to coal seams. The term polystrate simply means that these upright fossils penetrate many layers or strata of material. There have been upright buried stumps above coal seams, below coal seams and in some rare occasions penetrating through coal seams into the rock layers above which certainly should not be found if coal was formed slowly in a buried swamp.

Also, it has been observed that some of these fossil trees are tens of feet tall through the rock layers. One thing for sure is that such “trees” had to have been buried rapidly or they most certainly would not be present for very long. In fact, very often there is a perfect cast of the bark preserved in these fossils. Everyone knows that when an upright tree is encroached with an incoming flood and the water reaches a certain level the tree dies and it doesn’t take long for it to rot and fall over.

In conclusion, to flippantly associate all coal formation with slowly buried swamp environments is only plausible until you study the coal layers up close, when it becomes easy to see why this model fails miserably. A better model for coal formation is that these are not buried environments at all, but are indicators of massive rapid burials of organic material, and Noah’s Flood would have been the first of these, along with more modern but smaller catastrophes such as the Mt St Helens eruption. Of additional interest to note is that some of these polystrate tree rich coal seams that I have worked in cover almost 180 degrees of the earth’s surface so evidence of global flooding is very widespread.

Bob Powell is a geologist who has worked for the Tennessee State Division of Geology including five years as a Field Geologist. He published the Pilot Mountain Geologic Quadrangle (7.5 minute) and has undertaken private Geologic Consulting concentrating on Hydrogeologic studies at contaminated toxic waste sites with emphasis on the Fate and Transport of Contaminants in Groundwater. With the decline in mining in Tennessee Bob was moved to the Department of Environment and Conservation spending some 30 years as Project Manager/Geologist/Enforcement Manager in the Division of Remediation .