The original question was:
If the tiger and lion were intelligently designed, why are they able to interbreed, but create only sterile offspring? The same is true with horse and donkey, they produce sterile offspring. Why?

We need to start by asking just why we think these animals should be able to mate and have fertile offspring anyway. The bottom line is that our classification system has put them in the same genus, so therefore we conclude they should be able to interbreed.  The humbling factor is that whatever we label them does not necessarily make them part of the same original kind.  Our classification system is simply a way of organising our knowledge of living things based on out observations of their structure, function and genetics today.  We were not there to see the original kinds.

We do know that some creatures that are classified in the same genus, but labelled different species, can combine to produce fertile offspring, which is one indicator they were all part of and original kind. The best example of this is the Galapagos finches.  See our report Finch Gene Flow here.

Furthermore, the world has degenerated since the original created kinds were made. It is possible some that some similar, but mismatched, species can mate and reproduce for one generation only because there has been loss of whatever mechanisms (genetic, cellular, behavioural, etc.) originally kept them separate.

Let’s look at the two examples given in the question.

The sterile offspring of the horse/donkey combination, i.e. a mule, can be explained due to a mismatch in the number of chromosomes. Horses have 64 chromosomes and donkeys have 62.  A mule ends up with 63.  To understand why this results in sterility we need to look at what happens to chromosomes when living things reproduce, and the importance of even numbers.

Chromosomes normally come in pairs – one member of the pair inherited from the mother and one from the father. Therefore, horses have 32 pairs, and donkeys 31 pairs.  This is important when it comes to sexual reproduction, which involves the union of two cells, i.e. a sperm and an egg, to form a new individual.  If the sperm or egg (sex cells) had the same number of chromosomes as any other cell in the body there would be a doubling of chromosome numbers with each generation.  That wouldn’t work.  Within a few generations there wouldn’t be room for them all.  Therefore, during the formation of sex cells the number of chromosomes is halved by splitting up each of the pairs and giving one of each pair to the sex cells.  Therefore, a sex cell from a horse will have 32 chromosomes and a donkey sex cell will have 31.  When these are combined the total is 63 made of 31 pairs and 1 odd one.  Because horse and donkey chromosomes are similar enough, the new combined cell is able to live and grow into a new individual, a mule.  Growth involves making many more cells with the same number of chromosomes.  To do this all the chromosomes are copied, and each new cell gets one whole set.

However, when the adult mule tries to makes sex cells, there is a problem. There pairs have to be split up.  The normal process of making sex involves getting all the chromosomes to line up neatly in pairs in order to split off one of each pair to give to the sex cells.  But for an animal with an odd number of chromosomes this can’t happen.  There will always be an odd one out, so the process tends to stop there.

This problem will occur with all hybrids resulting from parents with mismatched numbers of chromosomes, not just horses and donkeys.

Lions and tigers have the same number of chromosomes, 38, or 17 pairs. Therefore, an odd one out caused by unequal chromosome numbers is not the problem.  In spite of this, hybrids resulting from a lion and tiger combination are usually sterile, so there must be a different reason.

Lions and tigers are both classified as felines, but even if they were part of an original Cat Kind, they have been separated for many generations of degeneration since their ancestors left the ark. Since then mutations have occurred in all animal populations, including lions and tigers, but not all mutations are the same in every population.  This means that lions and tigers of today have accumulated different mutations.  Not all mutations are lethal, they can simply result in variation in gene activity, or they can result in genes being moved out of their original place on the chromosome, which is how another problem can occur during the formation of sex cells.  To see where this can happen we need to look at the process of copying the chromosomes during sex cell formation.

We will look at what happens to one pair of chromosomes, but it will happen with each pair. Remember each pair consists of one chromosome from the mother and one from the father. In the diagrams below they are coloured differently, but they are a matched pair. 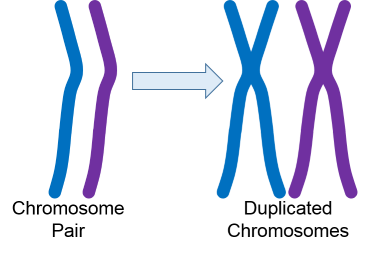 The first step is to copy each chromosome of the pair. The copies remain attached to one another until the last step in the process, when they are separated and each new chromosome goes into the mix with the other new chromosomes to be incorporated into sex cells.  The diagrams to the right and below show the process.

The double pairs then line up, and during this process, sections of chromosome are exchanged between the pairs, as shown in the diagram below. This process is known as “crossing over”, or recombination, and results in some come chromosomes containing a mix of genes from the two different parents.  After recombination the attached copies, some with recombined sections, split up into separate chromosomes.

During this process it is important to get the chromosomes of each pair lined up very precisely, so that the pieces that are exchanged contain exactly the same genes, including the sections that regulate the activity of those genes, i.e. turn them on and off at appropriate times. This precise alignment may not be able to happen in the offspring of similar parents from two separate populations if mutations have resulted in displacement of genes or alteration in gene activity. The newly made composite chromosomes may be missing some genetic information, or it may have a combination of gene regulators that do not work well together.  Genes do not act alone, they need to function in a coordinated way with other genes.  Therefore, gene regulators, i.e. switches that turn genes on and off are just as important as genes that code for the structure and function of the body.

This recombining process happens for every chromosome pair. Therefore, it is almost inevitable to each newly formed sex cell will have at least one of the new re-combinations in its chromosome mix.

Lions, tigers, horses and donkeys were intelligently designed in the beginning, with no dysfunctional mutations. Since then all living things have been affected by the degeneration that came into the world as a result of man’s sin and God’s judgement.  Therefore, it is possible that some kinds have lost some mechanisms that kept them separate to other kinds, and they can now reproduce, but give rise to dysfunctional offspring; or some original kinds have been split into subpopulations that have been subject to different mutations that stop them from reproducing fertile offspring when they meet up again.  Whatever the cause it is the result of degeneration in living things, not because there was anything wrong with the original designed Kinds.