You say that the giant animals in the fossil record grew to be so large because they lived for a long time. The Bible says people lived to nearly 1,000 years before the flood. If that is so could people grow to be over 5 metres (16 ft 5ins) tall?

Genesis tells us that many people in the Pre-Flood ear lived for over 900 years, as shown in the graphic below, which shows lifespans from Adam to Moses. However that does not mean they would have grown to enormous heights such as five metres. This is because the growth pattern of human beings is different from many animals. 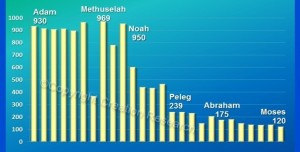 Some animals, including reptiles and amphibians do grow for as long they live, provided they are well fed, living in a warm environment, and are free of disease and stress. Therefore, if they live a long healthy life in good conditions they can grow to be very large. (For more information see the question: DINOSAURS: How could Noah have fitted such huge animals on the Ark? Answer here. )

However, this ‘continual growth’ pattern does not occur in most mammals, and it does not apply to human beings. People do not grow through their adult lives, how ever long those lives may be, or what quality the environment might be.

The normal growth pattern for humans after they reach puberty is to go through a period of rapid growth during adolescence, and then stop growing in height in early adult life. Many women have ceased growing by age 15 or 16. Some men may still be growing in their early 20s, but by the time people reach the age of physiological maturity in the mid to late 20s they are as tall as they are ever going to get. It is not possible to grow taller after this because the growth centres that enable bones to grow longer have closed down, and your bones cannot grow any longer, although they can get thicker. So even if the people who lived for almost 1,000 years in pre-Flood times took longer the go through puberty and adolescence, human bodies are programmed to stop growing in height soon after sexual maturity is reached.

Human beings are designed to not grow in height during their adult lives for good reasons. As the body grows taller the weight-bearing bones, such as those in the legs, must grow stronger. This means they must increase in overall mass, not just length. This makes them heavier, which means they need thicker stronger ligaments to hold them together and larger muscles to move them, which further increases the mass of the body. This increasing weight also puts extra strain on the weight-bearing joints. It also means the heart and lungs have to work harder providing blood circulation and oxygen to all this extra tissue. Can you see a vicious cycle developing here?

Even if we just consider the mass of the bones, without the other tissues, we run into problems because of basic geometry. The mass of an object is proportional to its volume, but the ability to resist forces is proportional to its cross sectional area. Therefore, as the bones grow longer they also have to grow in width to remain strong. However, these do not increase in parallel. This is particularly important in the leg bones, which must take body weight.

Bones have a complicated shape, so let’s consider the size of a simple round pillar. If you double the size of a pillar in all three dimensions, i.e. double it height and width, it will increase in mass by eight times, i.e. two cubed, but the cross-sectional area has only increased fourfold i.e. two squared. This cube-square rule applies to living leg bones as well as dead pillars. This means for the pillar to become stronger it must be proportionally thicker than the smaller pillar. For this reason an elephant’s bones are much thicker in proportion to their length than small animal, such as a dog or cat, or a mouse. You cannot make an elephant sized animal by simply scaling up a mouse. An elephant can distribute the weight over four legs, but humans must be able to support the body weight on two legs when standing, and when walking all the weight is carried on one leg for part of the stride. Even if a man was to grow to double the average height, his bones and associated muscles and ligaments would have to be impossibly thick just to support the body weight, let alone walk and run.

The maximum achievable healthy height for human beings seems to be between seven and eight feet (2.1 – 2.4m), e.g. some elite basketball players. There are people who grow taller than this because they have one of a number of hormonal disturbances which over stimulate the bone growth centres before they close over. However, these people are not healthy, and certainly not athletic. Most end up being unable to walk without some supporting aid, and often die young due to malfunctioning internal organs.

The Bible does record some apparently healthy giants, but these are not the long-lived pre-Flood people. The most well-known giant is Goliath, whose height is described as “six cubits and a span”. (1 Samuel 17:4) This would make him well over nine feet tall. Goliath was known as Goliath of Gath, and the people Gath seem to be a clan of giants. (See 1 Chronicles 20:4-8) One of them is also described as having six fingers and six toes, indicating there was a genetic growth disturbance in the clan, but they were a lot closer in time to the relatively disease-free period immediately after the flood than present day people. Other things were also large in those days – remember the giant bunches of grapes brought back from the Promised Land (Numbers 13:23). In a modern world, far removed from giant grapes, and subject to centuries of degeneration and pollution, gigantism is a health hazard.

As to the possibility of huge 5m (16.5”) tall 900 year old people prior to Noah’s flood – it is simply not possible for humans to grow to a height of 5 metres no matter how long they lived, then or now!

For more on Goliath see the question: Did Giant Goliath have poor vision caused by acromegaly, and couldn’t see David’s stone? Answer here.