Creationists insist that when fish die they float, so they can’t be buried on the sea floor and slowly form fossils. But in cold water fish can sink to the bottom, and will not float to the surface. Why don’t you admit they can fossilise this way?

The usual story is that fossilisation is a slow process, requiring several thousand to several million years.  When a fish dies, it sinks to the bottom of the sea, is slowly covered with mud and becomes a fossil.  Below is a typical illustration found in museums and textbooks.

The obvious critique of this widely believed process is that when a fish dies, its swim bladder will inflate with decomposition gases which soon causes them to float to the surface where they are scavenged, or decompose. This makes it impossible for fossilisation to occur. There are, however, two variables that we need to address.

First, not every fish has a swim bladder (sharks being a classic example), so when a bladderless fish dies, it will sink to the bottom.  Secondly it has also been shown that in very cold water a fish bladder will not inflate, and such a fish will sink also.

So, what about the claim that a bladderless fish or a fish dying in cold water can therefore be buried on the sea floor and then fossilised?  However, sinking on the bottom is not enough for a fish fossil to form.

There are fossil sharks, (Creation Research has some) but for reasons explained below they could not have been slowly buried whilst lying on the bottom of the sea.

As the question mentioned cold water, let’s consider that.

First, it is important to note that most major fossil fish deposits do not show evidence of having formed in cold-water environment. The fossil mix in the deposits shows they are mostly from a warm, humid environment. One such example would be the Green River Formation in Wyoming, USA. The abundance of fish fossils in the formation are mixed with snakes, crocodiles, birds, bats, palm branches and insects. All these animals and plants indicate a warm environment.  Furthermore, the mix of different living things, i.e. land and aquatic, in one deposit fits with this being a rapid catastrophic event.  A cold-water critique does not work for this deposit, or for many others

In the present world, particularly on fish farms, we do see ‘bladdered’ fish sink in cold water conditions.  But what happens to it then makes fossilisation impossible.

A major problem for fish farmers who use cold-water aquariums so dead fish do sink, is that some particularly ‘ravenous’ fungi begins to attack the carcass and break it down.  Within a few hours fungi from the genus Saprolegnia grow rapidly over the carcass, and not only break it down but also harness it to the sea floor and prevent it from floating away. All of which makes it harder for fish farmers to remove the carcass, so the trapped rotting flesh will contaminate the water. 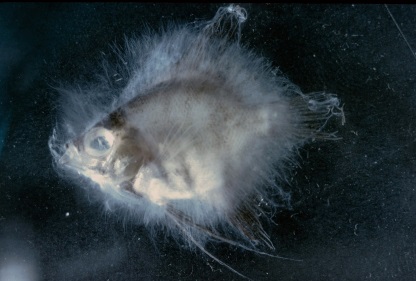 The fungi will also eventually fully digest the fish, which means those fish that do manage to reach the sea floor, and settle in the mud, will never become slowly buried and fossilised.  Any fish will be destroyed long before it even has a chance to fossilise. Rapid burial in oxygen free sediment is your only option for fossilization.

Such rapid breakdown of dead marine creatures can be seen in the natural world as well. There are numerous undersea documentaries showing fish and whale carcasses having sunk to the sea floor, only to be devoured by a host of seafloor scavengers.  This is the reason bladderless fish, such as sharks, can also only be fossilised by rapid burial.

All fossilisation must be fast, must be deep, and must be without oxygen, or fungi and other microbes can get to it.

First, it is imperative to understand that fossilisation has nothing to do with time. Time is the enemy when it comes to making fossils, the more time you have, the less likely is fossil formation, as the creature will be destroyed. 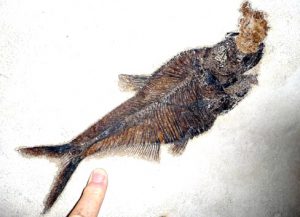 Second, most fish fossils show incredible detail, including fins, scales, eyes, and even sometimes proteins and internal organs. In other words, in spite of text book drawings, it not just the bones that are preserved.  To get such high level of preservation, you must bury the fish rapidly, deeply, and with sufficient chemical infiltration under pressure to preserve such detail.

Therefore, we stick to our claim that fish fossils provide excellent evidence of rapid burial.

End note: Many thanks to the fish farmer supporter who helped me with my research by introducing me to the fungus, and the problems he experienced with fish carcasses.

Related question
AGE: If the earth is young, why do the Green River Shales in Wyoming show rocks take vast ages to form?  Answer here.

Joseph is a university student, studying geology and palaeontology. He also assists John Mackay with geological field research, leads field trips for Creation Research and assists at meetings. His talks on dinosaurs are very popular with school students. Joseph also has his own fossil museum dedicated to showing how rocks and fossils are evidence for the Biblical history of the world.