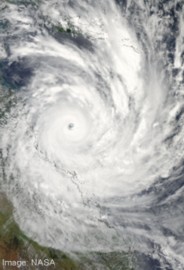 Creation Research has received many enquiries asking if floods, earthquakes, tornados tsunamis, cyclones and other natural disasters God’s judgement? Politicians and the media all over the world have described the natural disasters of 2010 and 2011 as cruel, unfair and ruthless, but entirely natural, although the leader of the Green Party in Australia wanted to blame the coal miners for causing global warming with their emissions. One Queensland newspaper described the floods with the headline “Biblical Disaster,” but no political leaders and very few church leaders urged us to read God’s word and seek His mercy at the time of the natural disasters.

The Bible tells us some of these kinds of events truly are God’s Judgement. God told Noah that he was going to destroy the world with a flood of waters because mankind had become corrupt. (Genesis 6: 13-17) He also told Pharaoh (through Moses) that He was sending hail on the Egyptians if Pharaoh would not let God’s people go. (Exodus 9:17-18) God also used hail, storms and earthquakes to defeat the enemies of God’s people, but this does not mean every natural disaster was specifically sent by God in judgement. Whenever God was sending judgement in the form of an earthquake or extreme weather event He said so through His prophets. If He didn’t, men didn’t know why any natural disaster event happened.

By the time of Jesus’ earthly life many Jews believed that all disasters were God’s judgement on the people who suffered because of them. However, Jesus reminded them that those who were killed when the Tower of Siloam fell down were no more sinful than any other people, and his point to the disciples was they shouldn’t jump to “A sinner is getting what he deserves” conclusion, and death can come unexpectedly to any one of us, so be ready by repenting of your own sins.

Jesus did affirm that God was in charge of the weather, and all people, good and evil, are dependent on His provision. (Mathew 5:45-46) In an indirect way all natural disasters are God judgement, as part of the fallen world. After the first man sinned God cursed the ground (Genesis 3:17) and subjected the whole creation to frustration. (Romans 8:20-22) Therefore, Jesus warned us that as long we are in this world we will have tribulation. (John 16:33) Nevertheless, God has not abandoned us to random natural disasters, and He can and does use these for His purposes, even if it is just to remind us of our fragility and mortality, or to give opportunity for Christians to show if they really do love those who are suffering, as well as being witnesses to the fact that God has a better future for all who repent of their sins and put their trust in Christ the Creator and Saviour.

Amongst the often atheistic ramblings in the press during the Australian flood disasters, the media accurately reported the testimony of Nash and Victoria Matthews, whose parents were swept to their deaths as floodwaters raged through their house. Nash saved Victoria by pushing her into the ceiling. Victoria later wrote: “My family are at peace, knowing my parents are not suffering and are in a better place with their Father in Heaven, but we shall miss them greatly. … We are comforted by the Lord for He has given us strength.” This Christian testimony shone like a beacon in the dark depressing gloom of suffering.

Genesis to Revelation warns us there will be earthquakes, floods and other disasters until the end of the world. Let us take them all as a warning that we must be ready to meet God as our Creator and Judge.