The original question was:
How can you believe in a young earth when the Green River Shales in Wyoming have varve layers that show vast amounts of time was required to form the rocks?

Creation Research has many fossils from these beds in their collection.

The Green River Shales in Wyoming are distinctive for two things – they contain many alternating dark and light layers, called varves, and they contain numerous, well preserved fish fossils. Geologists look at these and compare them with the light and dark layers seen in sediments formed in recent glacial lakes and conclude they represent seasons, i.e. summer produced a lot of growth resulting in much carbon (a dark layer), then winter produced little or no growth therefore less carbon (a lighter layer). Therefore, a sequence of dark-light-dark-light layers is claimed to represents two years. One 45cm (18in) thick fossil fish bed from Ulrich Quarries in Wyoming contains enough varves to indicate it took somewhere between 4,000 and 20,000 years to form (authorities vary on the varve count). All of this is logical, but is it true? 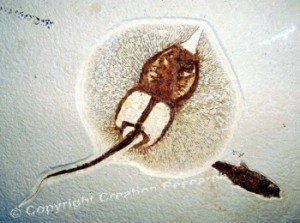 But there is more evidence to consider. The Green River Shales contain millions of fossil fish and I have many of them in my collection, including some that are up to 2cm thick and 30 cm long. According to the slow and gradual winter/summer deposition theory they would have taken some 200 years to be buried and the fish would have disintegrated long before a fraction of its thickness was buried. Those thousands of varve layers in Wyoming rock do not represent years after all. They represent minor variations within larger currents which buried tens of thousands of fishes in a catastrophic flood of mud.

Most museums and textbooks still teach that fish were fossilised after they died, sank to the bottom and were slowly covered by mud. Yet everybody knows dead fish float! When they do sink they are eaten by scavengers and rapidly decay due to the action bacteria and other microbes. 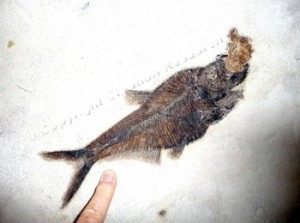 Next time you watch an underwater TV documentary, look out for dead fish on the ocean floor being slowly buried. Rocks containing fish which sank to the bottom should also contain the remains of bottom dwelling animals or plants. The Green River formation does not.

The only way to fossilise a fish is to bury it rapidly and deeply in large quantities of muddy sediment, while it’s still alive. In fact, one of my specimens (shown here) was being squashed alive by the incoming sediment so quickly that its stomach contents were forced out of its mouth. The Green River formation is the record of rapid burial in a catastrophic sediment formation, not slowly forming rocks over vast periods of time.

The fish themselves are also evidence that Genesis, rather than evolution is true.

Most of the specimens you can buy in a rock and fossil shop are Knightia or Diplomystus. These are types of herring, just as in the tins of oily fish you buy in supermarkets. In fact it turns out that the fossil Diplomystus dentatus from the Green River Formation in the USA, is the same as the living Australian fresh water herring; Nematalosa erebi. So Aussie creatures are not as unique as most people think and the evidence is no help to evolutionists at all. According to evolutionary geology the Green River rocks are around 50 million years old. If this was true it would only be evidence that herrings have not evolved no matter how long evolutionists give them. In fact, fossil and living herrings show us that herrings have always been herrings and not changed, i.e. they have reproduced after their kind, just as Genesis says.

Likewise, the assumptions that have dominated Geology since the days of Charles Lyell and Darwin, to make the earth old and to reject anything that resembles Noah’s flood can be exposed as false right here. In the year of Noah’s flood when rain first began to fall and water erupted from underground springs, enormous quantities of mud would have rapidly poured into rivers and the sea for the first time, suffocating and burying a vast number of creatures. Eventually the whole earth was flooded, as a judgement sent by God upon man’s sin. The first major fossil beds began to form at this time. Since then more fossil beds have formed but only in catastrophic circumstances, such as floods or volcanic eruptions. The past was faster than most people think.

Creation Research has received the following report on Carbon 14 (C-14) dating the Green River shale, from Hugh Miller, USA. “A specimen of Green River shale which contained 10.88% carbon has yielded a C-14 age of 45,130 ± 270 years B.P. (Before Present) The shale specimen was collected from the Green River Shales in the Piceance Creek Basin of CO, USA, by Paleochronology Group co-coordinator Bea Dunkel.”

Since these rocks are supposedly between 40 and 50 million years old they shouldn’t contain any Carbon 14. Furthermore, the Carbon 14 date is a thousandth of what the age of the rock is supposed to be. Thus, the Green River Formation provides more evidence that the dating assumptions used to claim the earth is millions of years old are invalid.