The original question was: I was told during one of your sessions by the chap sitting next to me that he thought Darwin had recanted on his evolution thoughts as he neared death. I had heard it before, but thought that I had also heard it was rubbish.  With your experience and knowledge of the Darwin family, can you advise the real answer?

Ian Taylor, has researched this issue, and has written about it in his Book In the Minds of Men, which traces the historical roots and progress of evolutionary theory.  Below is an excerpt from Chapter 5 of this book.

Darwin died in April 1882 at the age of seventy-three, worn out with the struggle of his work in the midst of ill health for almost half a century. The clamour over his evolutionary idea had died down significantly by this time, and many in high places had been completely won over. Instead of being buried in the Anglican churchyard in the village of Downe, he was buried, by request of a parliamentary petition, in Westminster Abbey, where he lies today near the tomb of Sir Isaac Newton. He was soon to be followed by his evolutionary friend Sir Joseph Hooker; Sir Charles Lyell was already placed at the Abbey. (Thomas Huxley, the great champion of Darwin’s ideas, did not make it to the Abbey, presumably because he had ruffled too many episcopal feathers; however, he did receive secular sanctification if not sacred.) The British Natural History Museum had virtually deified Darwin by having a marble image of the man carved twice life-size and seated pensively on a huge marble throne; for many years the image took pride of place in the central hall of the museum at the head of the main stairway. When chief apostle Huxley died in 1895, a similar image was produced and raised to be seated on the right hand of his master.

From time to time pamphlets and tracts appear which claim that near his death Charles Darwin became a Christian. The little homily concerns a certain Lady Hope, a Christian worker who visited the partially bedridden Darwin shortly before he died. The scene is set in “one of those glorious autumn afternoons,” and the account describes him as “a dying man reading his Bible” and regretful at having rejected in his youth its early chapters. The conclusion piously calls for all those believing in evolution to repentance and points out that even the father of the theory recognized his errors just in time to save himself from damnation.  The truth to this account has finally been secured by Dr. James Moore and given in his book The Darwin Legend published in 1994 (Baker Book House).

Dr. Moore spent twenty years tracking down the facts which briefly are as follows: 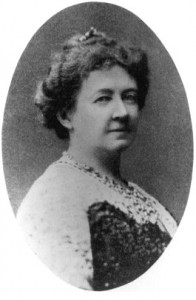 Elizabeth Reid Cotton (pictured left) was born in Tasmania in 1842 and moved to England in the mid-1850s where her father retired as General Sir Arthur Cotton. Both father and daughter were Anglican evangelists opposed to the evils of drink and tobacco. When the American evangelist D. L. Moody came to Britain in 1875, Elizabeth was asked to join his team for the English crusade. In 1877 and at the age of 35, Elizabeth married the 69-year old Admiral Sir James Hope. Elizabeth became known as Lady Hope, an entirely appropriate name for an evangelist. She was widowed in 1881; then, at the age of 51, married philanthropist T. Anthony Denny; he was 73. In 1909 he died and she was widowed again and a potentially wealthy woman. However, she badly mismanaged her money and by 1911 was officially declared bankrupt. In 1913, at the age of 69, she moved to America and in 1915 visited the Moody family – one can only suspect to seek some financial assistance. It was at this time, 34 years after the event, that her written account of her visit to Charles Darwin first appeared in the August 19, 1915 issue of the Watchman-Examiner (Vol. 3, p. 1071). Following this story of Darwin’s alleged conversion, she became the darling of the Christian talk circuit and her fortunes took an upward turn. She died at the age of 80 en route to England.

The records show that Lady Hope did visit the village of Downe and did visit Charles Darwin at his request, while according to meteorological records, the “glorious autumn afternoon” was sometime between September 28th and October 2nd of 1881. Darwin died at the age of 73 in April of the following year. The circumstances were that two well-known atheists, Edward Aveling (Karl Marx’s son-in-law) and Ludwig Büchner had had a two-hour meeting with Darwin on Wednesday, September 28th. During this meeting, at which Emma Darwin was present, Darwin had admitted that he had given up Christianity at the age of 40. Although a Unitarian regularly attending the village Anglican church, Emma Darwin had always been concerned for her husband’s salvation. Dr. Moore suggests that Charles had merely invited Lady Hope as a sop to mollify his wife’s concern.

The facts were that Darwin was not an invalid, but his habit was to lay on the couch and smoke a cigarette in the afternoon; he may even have arranged to be holding a Bible at the time of Lady Hope’s visit. Her written account consists of a little truth larded with a lot of imagination. She was a skilled writer, having written dozens of Christian booklets and tracts, and had written the account of her visit to Darwin in such a way that the reader would naturally conclude that he had had a genuine conversion experience. However, the account is careful not to claim that he was actually converted either before, during or after her visit. Henrietta, Darwin’s daughter, had sat at his bedside during the hour of death with notebook in hand to catch every last word, but there was nothing to indicate that he had been converted. The Darwin family have always emphatically denied any suggestion that Darwin was a Christian. Certainly, there is no indication from Darwin’s correspondence written from September 1881 to a few days before his death seven months later, that he even acknowledged the existence of God

For an overview of Darwin’s transition from bright young theology graduate to Bible-denying agnostic see the Creation Research article The Descent of a Man.  PDF here.

Ian T. Taylor was employed for more than twenty years as a research metallurgist in the laboratories of one of North America's corporate giants. He obtained patents for high-strength weldable alloys, armor plate, and a novel process for the manufacture of heat exchangers. Following a conversion experience, he spent five years in Christian television production where he became producer-writer for a science documentary series broadcast throughout the U.S. and Canada. His first book, In the Minds of Men, was issued in 1984 and has since become a recognized classic in its field; it has gone into four editions with eight reprints. In 1996 he became director and voice of the daily radio program, Creation Moments. In 2002 he completed another book titled Better to Bury Than to Burn. Styled after In the Minds of Men with copious documentation and illustration, this smaller work exposes the growing practice of cremation.