The original question was:
Over the past 4,000 years European farmers have been a selecting factor on the original purple carrots so that the carrots have ended up orange. Isn’t this evolution?

Carrots do come in a variety of colours including white, green, yellow, red and purple as well as the best known orange ones, which are high in carotenes, naturally occurring chemicals your body uses to make vitamin A, an essential vitamin for maintaining eyesight. Yellow and orange carrots have been recorded since Roman times but orange carrots became the common variety in Western Europe in the sixteenth century, largely as a result of Dutch farmers breeding them for bright orange colour to be more pleasing (and saleable) to their royal family: The House of Orange. Since then the bright orange carrot with its high carotene content and sweeter flavour has been the most popular variety of carrots.

Purple carrots were first cultivated in Asia around 4,000 years ago and were introduced, or probably more correctly re-introduced, into Europe around the 10th century AD. But since changes in the prevalence of the orange colour has been due to deliberate selective breeding by farmers choosing from already existing varieties of purple and orange, and propagating the ones they liked, (or could sell) there actually has been no evolution.

There is a recent trend to promote the purple carrot because it also contains the dark red-purple pigments named anthrocyanins, which are also found in berries, and are considered to be good for us because they are anti-oxidants. Sadly for purple carrot promoters the purple ones are also more bitter than the orange carrots, so their efforts are probably doomed. 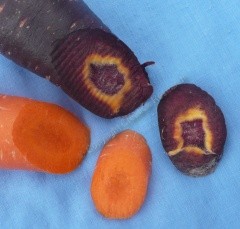 The fact that purple carrots have both carotene and anthrocyanins, but orange carrots lack anthrocyanins, gives us one clue as what the change from purple to orange amongst cultivated carrots really involved. One author of this article has been a carrot grower since his youth and has grown all colours of carrots and noticed ages ago that many purple carrots are actually orange inside.

So they used to have two colours and now they only show one. Evolution? Not likely! In fact, since I have often let carrots grow into their second year and go to seed, what inevitably happens to orange carrots is that they start to go purple again on the outside as they age, so all our selective breeding seems only to have slowed down the appearance of the purple and not removed it at all. Provably then, this colour change has not been the evolution from one colour to another. It has been the loss or delaying of one colour so that another colour that was already present became more visible.

Overall, the changes observed in carrots are a good example of selection, but they are not evolution at all. Carrots have only been observed to reproduce after their kind, just Genesis says they were created to do.