“What about C14?” is one of the commonest questions we get asked. We guarantee our answer below will stretch your grey cells, but you will find it well worthwhile to endure to the end. We are glad to report that Nature News 18 October 2012 and ScienceDaily 19 October 2012 report that the Carbon 14 method is in need of an overhaul – something we have been saying for years. But Nature News et al still believe the world is very old, so what problems could they report for this well known method? To understand this we need to look at the method and its continually revisable history.

How does Carbon 14 Dating Work?

Carbon dating is a method of estimating the age of organic matter by measuring the amount of radioactive carbon (C14) in the item. When animals and plants are alive they take both ordinary carbon (C12) and radioactive carbon ( C14) into their body through their food and through the air they breathe, so the amount of C14 in their body is similar to what is in the environment. When they die they cease taking in carbon of any kind. From then on the C14 decays, but the normal carbon (C12) does not. C14 will therefore become less over time but not the C12. As a result scientists can measure the ratio of normal carbon (C12) to radioactive C14 and use the ratio to estimate how long a plant animal or any products from them such as timber or cloth, has been dead. The less C14 the older the organic matter is considered to be. The method is commonly used to argue objects are up to 70,000 years old, so why does it need an update?

When the method was first possible dates from the method were cross checked, or calibrated, by comparing C14 measurements from artefacts of known ages, such as Egyptian mummies and bread from Pompeii, but recorded history went nowhere near 30 thousand, 40 thousand, or the now used 70 thousand years. So how did they find cross reference points to check their new clock’s accuracy? They didn’t, but neither did they tell anyone who wasn’t in the inner circle, thus everyone on the outside thought the method was both proven and reliable – but it wasn’t.

They next started to use C14 dates from tree rings compared against the number of rings, assuming one set of tree rings per season, but they soon discovered they only had enough tree ring samples to make the method usable at best for 14,000 years (in their estimation), so what to do next? Since then they have tried stalactite growth patterns and coral growth lines to calibrate the clock, yet got nowhere near the 70,000 years, no in despite confident claims on BBC documentaries, National Geographic, etc. it has all been bluff.

In the continuing search for a longer record, they have now studied lake sediment layers containing Carbon rich leaves to get a more accurate and longer time clock. A team of scientists led by Christopher Bronk Ramsey, a geochronologist at the University of Oxford, UK, have studied a 70 metre core of sediment from Lake Suigetsu in Japan, and counted the layers in the sediment to calculate the age. Assuming the layers represent one set per season, they calculate the sediment represents 52,000 years of history, so they are now trying to calibrate the C14 in the leaves in the layers against their clock so they can claim accuracy. But it is obvious they are still a way short of 70,000 years.

They also point out one more problem associated with the need for wanting a longer time record to calibrate the carbon clock: the C14 method depends on the assumption that the amount of C14 forming in the atmosphere has been constant. Any variation would speed up or slow down the clock. As commented in Nature News: “Various geologic, atmospheric and solar processes can influence atmospheric carbon-14 levels.” This means the formation of C14 is not constant. According to ScienceDaily, “Since the formation of C14 is affected by Earth’s magnetic field and solar activity and is therefore not constant, this relative time scale has no absolute timestamp in calendar years.” Links: Nature News, ScienceDaily

So at best we can comment Ramsey’s team is adding the assumption that one set of layers formed per year to supplement/reinforce the assumption C14 has formed at a constant rate, and we predict in the end both of these assumptions will be their undoing. But there are several more unstated assumptions in carbon 14 dating apart from the ones admitted above. We list several below that we use during debates that are never challenged because they are real problems to them “in the know.” So for a good hard read keep going – it’s worth it!

Unknown to most people there are other limiting factors to the method. For it to work the simple mathematical reality of solving all equations with one unknown produces the following conundrum. The left hand side of an equation has to balance against the right hand side so that when we state 3X = 9, the unknown X can easily be calculated. Applying this to C14, in order for the method to work, the system has to have been in operation long enough (millions of years) for the atmospheric Carbon 14 be in dynamic equilibrium i.e. the rate of formation of the radioactive C14 has to equal the rate at which it is decaying so that a constant level is maintained. However, if the level of C14 in the atmosphere has not reached equilibrium there is a serious problem.

Any serious evolutionist knows that even molecules have to evolve, so starting with a good dose of Big Bang Hydrogen and evolving through Carbon 12 and eventually heavy elements, planet earth, life and radioactive Carbon 14 which took millions of years, there should have been plenty of time for C14/C12 to reach equilibrium, even if we started with no carbon 14 in earth’s atmosphere. So what to do with an atmosphere in which C14/C12 is not yet in equilibrium? The obvious implication is the atmosphere is not as old as commonly believed.

We put this to former Los Alamos Nuclear Physicist Dr Tom Hayward and asked him to calculate how long it would take to build C14 up to its current level starting from zero, and to graph the results for us. His results and graphs are as follows:

1: Time for formation rate to be in equilibrium with decay rate is 30,000years. 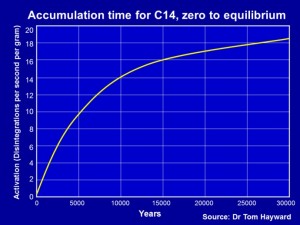 2: Time needed to reach current position of disequilibrium is between 13 and 16,000 years, assuming rates of C14 formation/decay are the same today as they have always been. 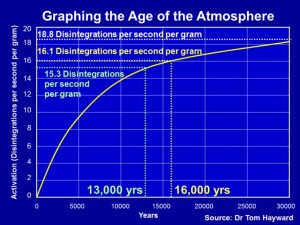 Sewell would concur with Haywood’s figures as he stated; “The difference between these two numbers shows that the buildup in the biosphere hasn’t had time to catch up with production in the stratosphere. In other words, the earth’s atmosphere must be less than some fifty thousand years old! This, in itself, is a strong evidence of creationist claims. But the C14 establishment’s response is that it’s merely a problem not yet solved.”

Did you notice that the graphs above illustrate the biggest assumption used in C14 dating; that the amount of C14 in the atmosphere is the same today as it was when the object being studied died. However, as the recent report above indicates, this is not true if there are changes in the “various geologic, atmospheric and solar processes” that influence the formation of C14. For example, the earth’s magnetic field shields the atmosphere from a lot of the radiation that forms C14. Measurements of the field strength show it has been decreasing since we started measuring it. So if it was stronger in the past, less C14 would have formed. Therefore, if there was less C14 for living things to absorb in the past, they would have had less C14 than the current atmospheric standard level when they died, which means their carbon date age would appear to be much older than their real age.

How does C14 fit into a Biblical Creation framework?

Radioactive carbon may not rate a mention in Genesis, but the Bible does tell us that when God finished creating the world it was “very good”. As radioactive carbon causes genetic mutations, it is not very good, so the air Adam and Eve breathed in and the plant food they ate did not contain it. It is most likely that the combination of the “waters above” (see Genesis 1:6-9) and seemingly stronger magnetic field would have kept out the radiation that constantly makes C14 in today’s atmosphere. However, after Noah’s Flood the protection of the waters above was removed, and the magnetic field is continuing to decay even as you read. Therefore radioactive carbon is building up in the atmosphere, and will continue to do so should the earth endure to 30,000 yrs of age.

Therefore, we predict that such radioactive gas will prove to be just one more factor responsible both for mans historic life span reduction from Methuselah’s 969yrs, to us who rarely make it to 96.9, and it will be a lingering source of new and detrimental mutations that will cause our bodies to continue to degenerate. Man will devolve – not evolve.

We also predict that unless these changes in earth’s atmosphere and magnetic fields are taken into account carbon dating will always be needing an update. For an example of problems with radiocarbon dating see “Neanderthal radiocarbon Problem” here.