The original question was:  I watched a documentary recently where Bonobo monkeys were shown walking upright all the time. Doesn’t this prove we came from the ape family?

Bonobos, Pan paniscus, are a type of chimpanzee, sometimes referred to as pygmy chimpanzees or rainforest chimpanzees, who live in swampy rainforest regions near the Zaire River in central Africa. They are smaller than the common chimpanzee Pan troglodytes, and their limb and body proportions are slightly different, giving them a lower centre of gravity, which does make it easier for them to stand upright. They are very agile in trees, and can walk upright along large branches, but not by balancing as a tight rope walker does, but by using their arms to grasp other branches to steady themselves. However, despite claims that they stand and walk upright all the time, their main way of getting around on the ground is by knuckle walking, a four-limbed gait that uses their long arms to support their body weight. When moving along the ground their gait varies, and they will switch from walking on all four limbs to walking on two limbs, and back again. Sometimes they even walk in “tripedal” mode, using both legs and one arm, especially when carrying something in the remaining hand.

So the simple answer to the “upright walking ape” claim that has reached the status of Urban Myth due to widespread viewing of a short 20 second TV documentary clip, and as one famous TV pair are good at saying … this myth is busted!

So what is true? Bonobos can walk on two legs for short distances, about 20 metres, and can even carry things in their arms whilst doing so, but their stance and gait is never fully upright. Their knees and hips do not fully straighten as in humans, and their trunks and heads are bent forward, rather than being vertically balanced above their legs, as in humans. (See D’Août, K, et. al. Locomotion in bonobos (Pan paniscus): differences and similarities between bipedal and quadrupedal terrestrial walking, and a comparison with other locomotor modes, Journal of Anatomy 2004 May; 204(5): 353–361. doi: 10.1111/j.0021-8782.2004.00292.x)

Even if bonobos and other apes could walk fully upright it would still not be a proof that humans evolved from apes. Having similar structures and functions does not prove that one kind of living thing turned into another – it just proves they both need that function or structure in order to live where they do. It does not tell you how they got that structure or function in the first place. It’s a good example of how the modern mind is trained to look only for similarities, when we should be looking for differences as well, and surveying all the evidence.

Furthermore, if evolutionists want to claim one kind of living thing evolved into another then they have to explain how the differences were overcome. For example, all chimpanzees (large or pygmy) have a flat foot with an opposable big toe and long toes. This is a good functional design for an animal that clambers around trees, and needs to grasp branches. It is not good for supporting the body weight on the ground for very long, unlike a human foot with its arch and tightly bound, forward facing big toe, and is well designed for supporting the body weight and walking on the ground. 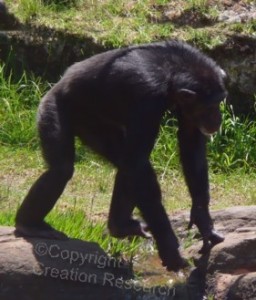 Chimps also use their hands to help support the body weight in knuckle walking. They can use their hands to grasp and manipulate objects, but their thumbs are short and not fully opposable, and their fingers are long and curved so they can use them for walking on all fours. If you claim humans evolved from chimp-like creatures you need to explain how four hand-like appendages with ‘thumbs’ and grasping fingers and toes turned into the human condition of two hands with fully opposable thumbs, well designed for manipulating objects, and two feet with arches and sets of five ground-hugging non-grasping short toes, well designed for walking.