The original question was: In a discussion with an atheist recently, he made the following claim: As for whether there could be an intermediate between bats as we know them today, and non-flying mammals, I will direct you to the Australian sugar glider; a nice example of how flight membranes could evolve from non-gliding animals, to gliding, and then eventually flight. 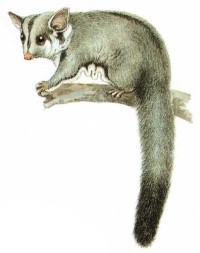 The Australian sugar glider is a small tree-dwelling mammal, so named because likes to eat nectar and other sweet plant fluids, along with pollen and flowers.  It has gliding membranes extending from its wrists to its ankles, and can glide for distances up to 90 metres.  This is impressive for a creature that is only about 17cm (7in) long.  However, it cannot be an evolutionary intermediate for between bats and non-flying mammals because it is a marsupial, and bats are placental mammals.

There are placental gliding animals, such as “flying squirrels” but these show no evidence of ever being non-flying or on their way to developing the flapping flight of a bat.

The aerodynamic membrane of a gliding mammal consists of a flap of skin extending between the front legs and back legs, with some extra support from cartilaginous spurs attached to the wrists or elbows.  It functions more like a parachute than a wing.  The animals have some ability to manoeuvre during flight, but nothing like the lift and quick turns of a creature with powered flight. 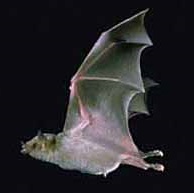 The wing of a bat is supported by highly elongated fingers, and is actively flapped for flight.

Furthermore, it takes more than just an aerodynamic surface for an animal to fly.  It has to have sufficient muscle power, and bone and joints that facilitate the flapping movement.  It also has to have heart and lungs that provide enough oxygen and nutrients for the flight muscles.  Flapping flight also needs precision nervous system control.  The movements involved in controlling the gliding membrane are nothing like the flapping flight of a bat.

Gliding mammals are fully functioning animals that live successfully without the need for powered flight.  There is no evidence they were ever non-gliding and they show no evidence of developing bat-like wings.  All our observations are that they are separate distinct kinds that reproduce after their kinds, just as Genesis says.