How are fossils formed?

Firstly let us clear up one thing: many people confuse the words fossilised and petrified.

A fossil is any remains of an animal or plant or trace of it, such as a footprint or even only a chemical residue, so any clue that some form of life has been there is technically a fossil.

After that we can divide fossils into various types or grades such as the following:

Original: where the actual creature is still there, such as a frozen Mammoth, or the green leaves found 600m (2000’) deep in the Alaskan oil fields or the original wood found up to 900m (3000’) below the surface in Texas.

Altered: where the chemicals in say a plant have been reduced to a Carbonised film of the plant which still show its shape. Sometimes the chemical remains are so abundant we refer to it as a fossil fuel such as coal where there are so many carbonised remains one on top of the other you can hardly see individual plant at all.

Mineralised: where the spaces in the wood or bones are filled with a new mineral. The original bone is still there. Many dinosaur bones are of this type.

Imprint: where all remains of the creature have gone but the 2D ‘print’ of creature shows its outline.

Mould: where the creature has gone but its full 3D shape has been preserved by what it has been buried in. Even the Roman people covered in ash from Mt Vesuvius qualify this way.

Cast: where a shell has been filled with sediment then the shell has dissolved away leaving an exact copy.

Trace: where no remains of a creature exist except a trail or footprint to show it was there.

Replaced: where the whole creature has been chemically replaced or altered so that what remains is an exact copy of the original sometimes down to even microscopic detail. When the original is wood, and the chemical involved is silica, it is the most common form of petrified wood.

Below are some examples of different fossilisation processes from the Creation Research collection. 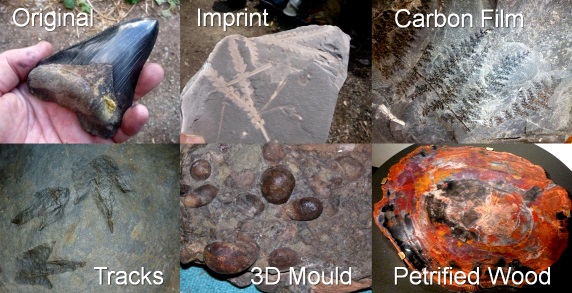 Returning to the Homo naledi bones.

Here is the description of the bones from the original paper on the fossil site in the Rising Star cave system in Africa:

“The bones are generally, partially mineralised; there is no evidence of calcite crystal formation in or on bones, but some bones and teeth are dotted with black iron-manganese oxi-hydroxide deposits and coatings (e.g., Figure 10), and an orange-colour residue of iron oxide (e.g., Figure 10B). Colouration of the bone underlying surficial mineral deposits ranges from light grey to red-brown. The internal structure of bones is bright white in colour.”

When bones have been filled by iron or other chemicals they become quite heavy and discoloured. The fossil bone pits we have established at our Jurassic Ark Museum are showing that this can happen very quickly, i.e. months, not millions of years.

The H. naledi authors also suggest the bones show signs of being gnawed by snails and beetles. (Dirks et al. eLife 2015;4:e09561. DOI: 10.7554/eLife.09561, p18) This usually indicates that the bones have not been buried deep under any protective layer that would have prevented beetles and snails from scavenging them, and tends to support the claim that the bones belong to many creatures that died outside the cave, were not buried, and got into the cave through being washed in.

None of this evidence helps any evolutionist claim that this new ‘skeleton’ made of unconnected bones, is of any help to their theory at all.

For more on Home naledi, see the question: NEW APE MAN? Is the discovery of Homo naledi in South Africa evidence for apes evolving into humans? Answer here

For more on rapid fossilisation see the question: If the earth is young, why do the Green River Shales in Wyoming show rocks take vast ages to form? Answer here

Homo naledi image (at top): Copyright Berger et al. eLife 2015;4:e09560. DOI: 10.7554/eLife.09560 Reproduced under the terms of the Creative Commons Attribution License, which permits unrestricted use and redistribution provided that the original author and source are credited.